Script Alan Moore, art by Jacen Burrows. All material is ©Alan Moore. For a complete list of  all books reviewed in this blog, please visit the index page. 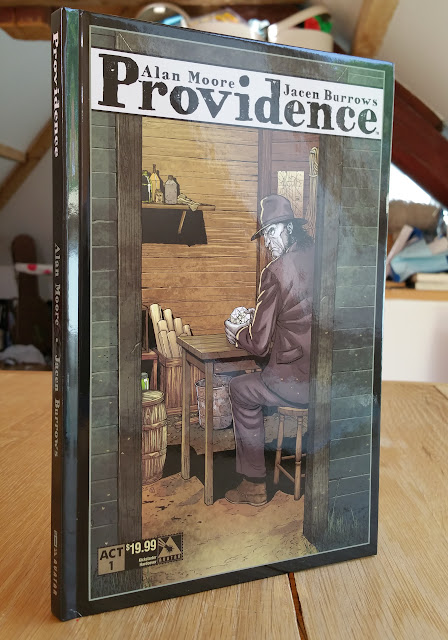 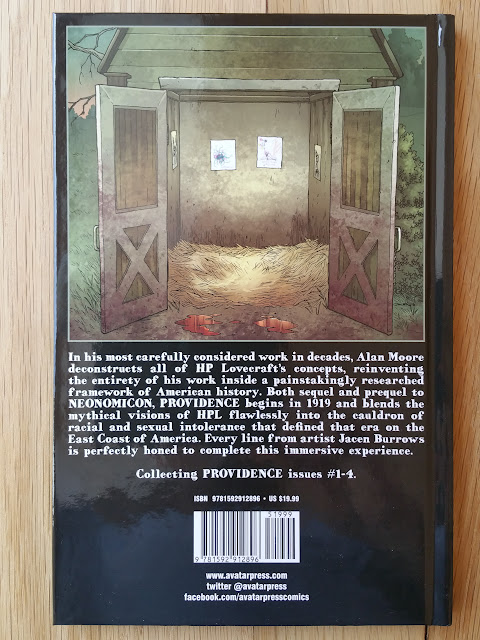 This article deals with the limited Kickstarter editions of Providence Act 1 (ISBN: 9781592912896, 160 pages, cover price $19.99), collecting issues #1 to #4 of the monthly series. This publication was a deluxe by-product of the Cinema Purgatorio campaign  launched by Avatar Press in February 2016  for an April/May 2016 shipping. In my reward I was entitled to get three versions of this hardcover book. The three pictures above are from any of the three versions as they share the same cover and bar code (it is the same book basically). 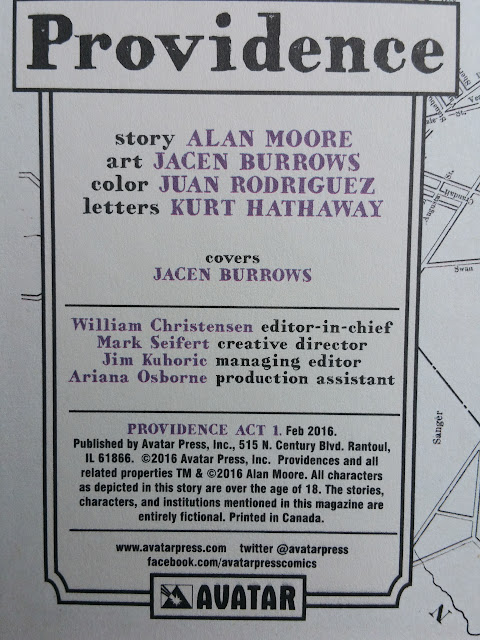 Along a picture of the illustrated second of cover (third of cover is plain white), there is a picture below for size comparison with issue #1 of Providence, and another one zooming on the (very tight) binding. 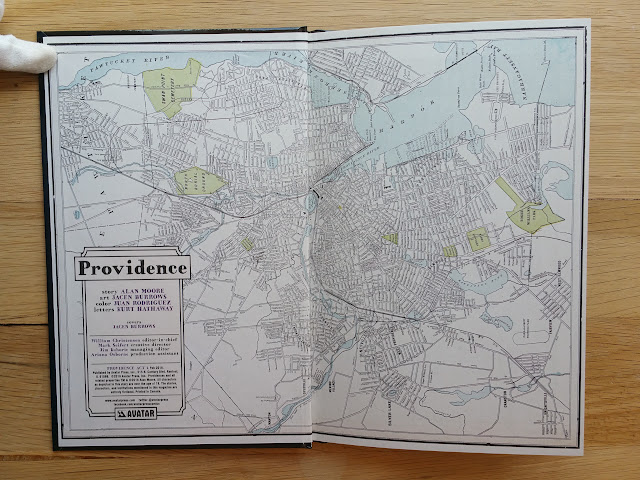 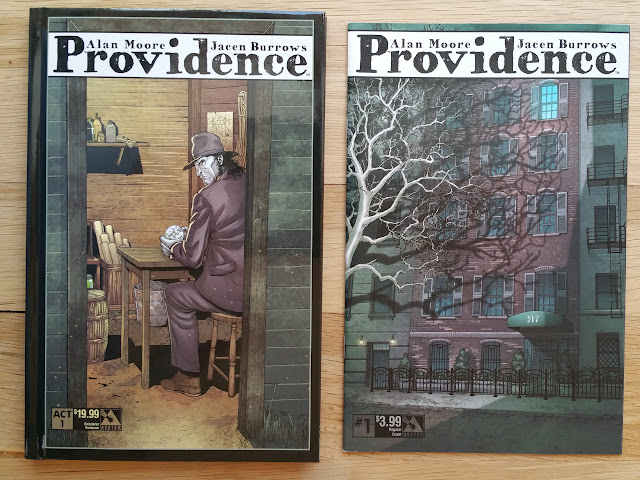 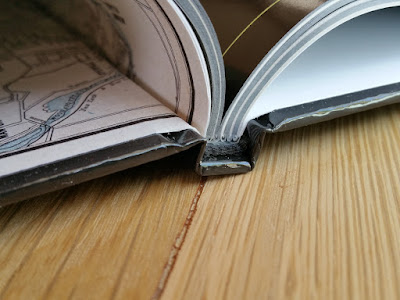 The "regular" HC edition of this book was first issued in May 2016 (I don't own this version):


From Avatar Press product description of the first print of this regular edition: For a limited one-time run, Avatar Press is presenting a collected Providence Act 1 Hard Cover edition that contains Providence issues #1-4, and all the back matter, which is limited to 6,666 copies. This edition will not be reprinted, there will not be a softcover edition, and this material will not be printed again until the complete collection is available in the far distant future.

And the "far distant future" can now be scheduled to March 2017, when the "final printing" of that HC edition will be reissued. Again, from the official product description:
Due to overwhelming demand, we offer one final printing of the Providence Act 1 Hardcover! Alan Moore’s quintessential horror series has set the standard for a terrifying reinvention of the works of H.P. Lovecraft. It is being universally hailed as one of Moore’s most realized works in which the master scribe has controlled every iota of the story, art, and presentation. The result has been a masterpiece like no other and a true must-have addition to his essential works in the field. We present a collected Providence Act 1 Hard Cover edition that contains Providence issues #1-4, and all the back matter, in this one-time printing of the edition. There will be Act 2 and Act 3 Hardcovers in the coming months, also limited to single production runs. This will not be kept in print any further and this is the final opportunity to get a hardcover edition of the first chapter of Alan Moore’s horror masterpiece .

Notice that only the 26 lettered copies have reached their pledge limit at the end of the campaign, so that means that copies of the other versions could still be available. 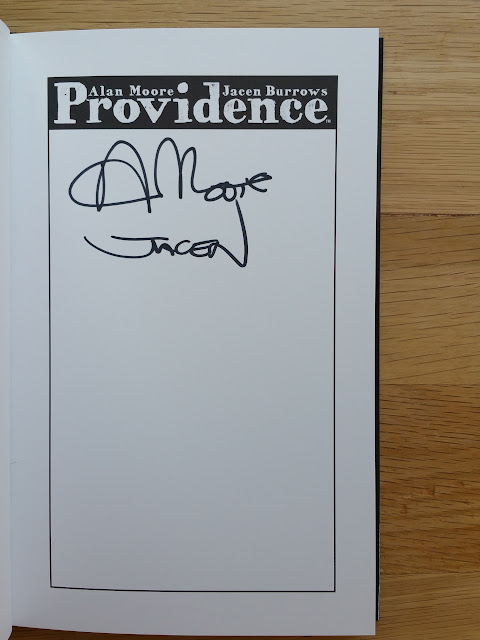 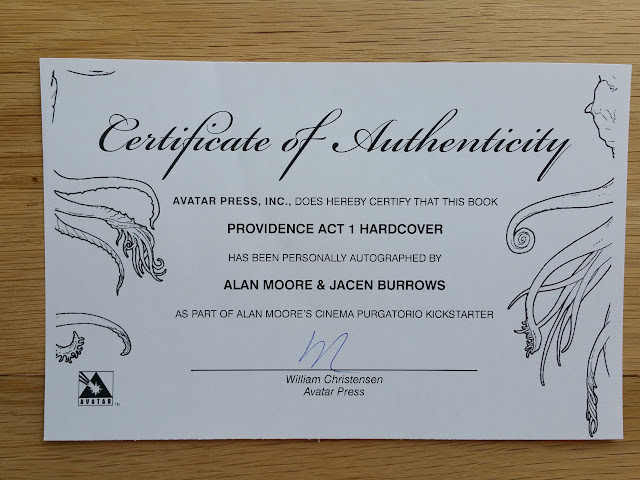 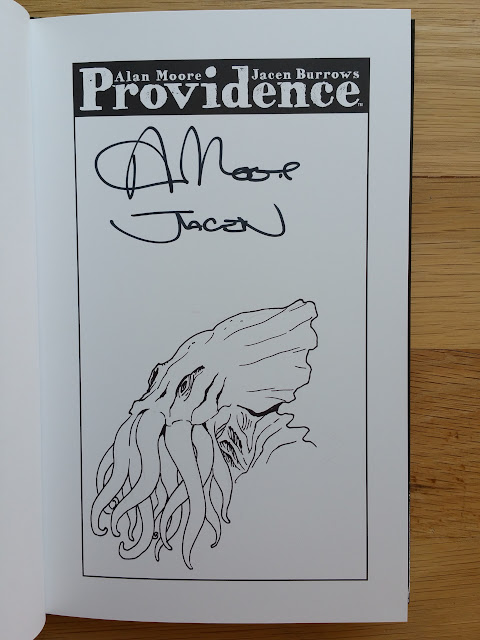 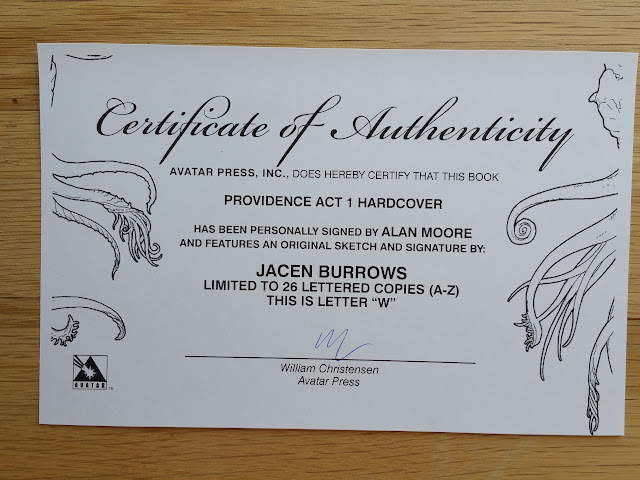 The main content of the book, printed on thin glossy paper, is identical for all Kickstarter versions. It collects all material published in the original issues, including the regular cover in its virgin form, as well as commonplace book entries and back covers. Providence is the prequel to The Courtyard and Neonomicon. There are no extra in any of Providence Act 1 editions (regular or Kickstarters editions). 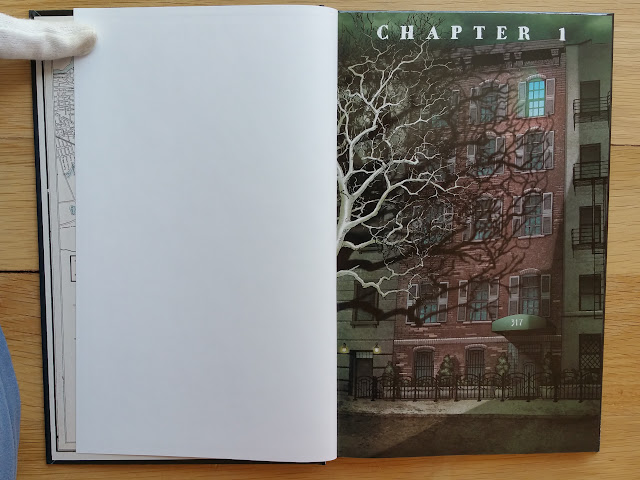 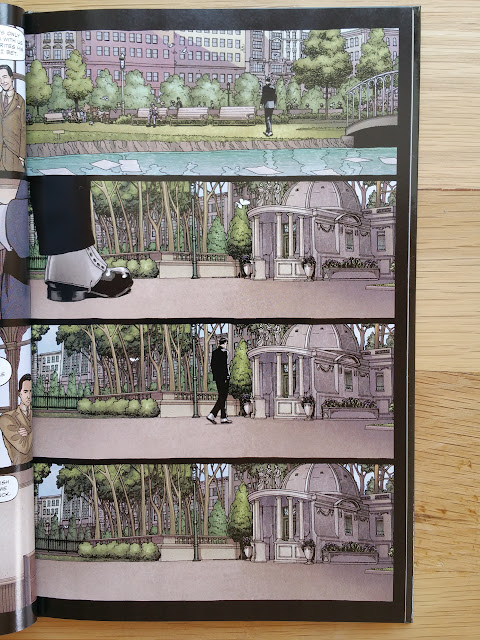 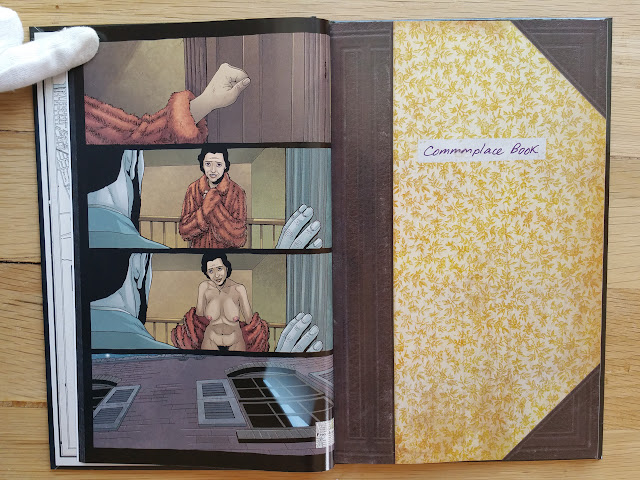 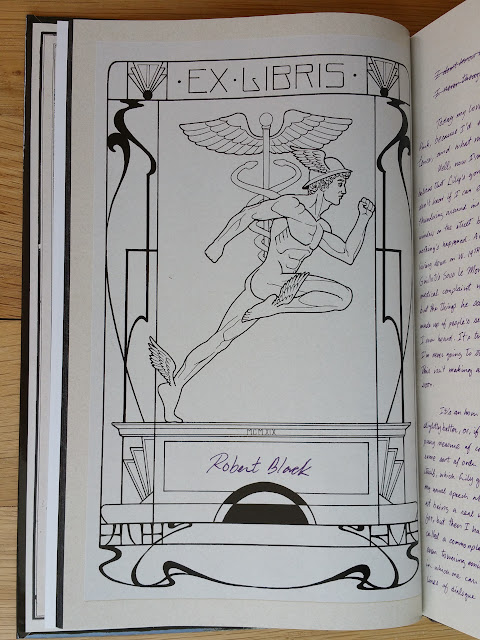 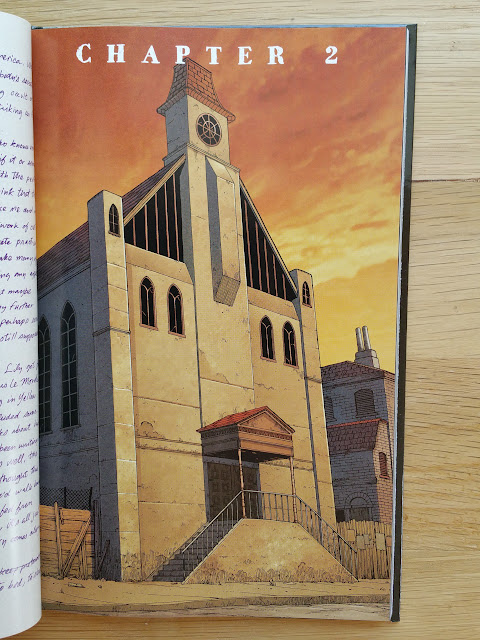 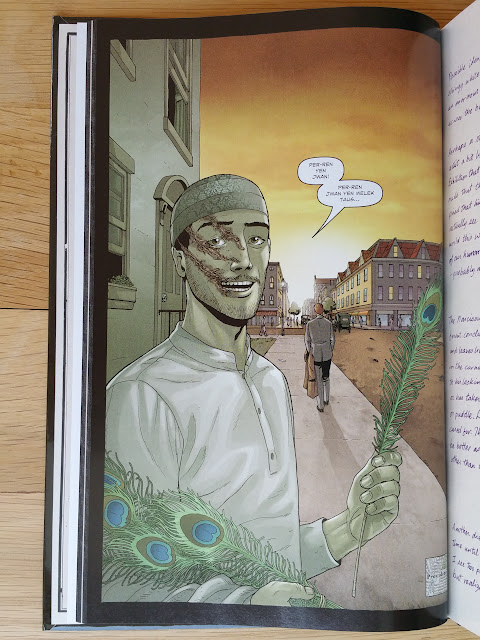 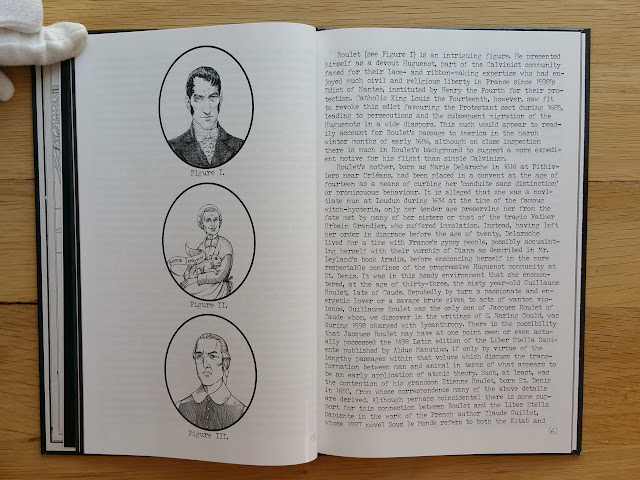 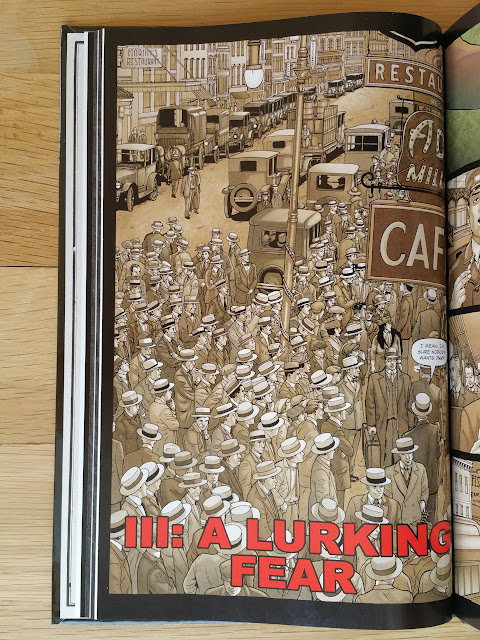 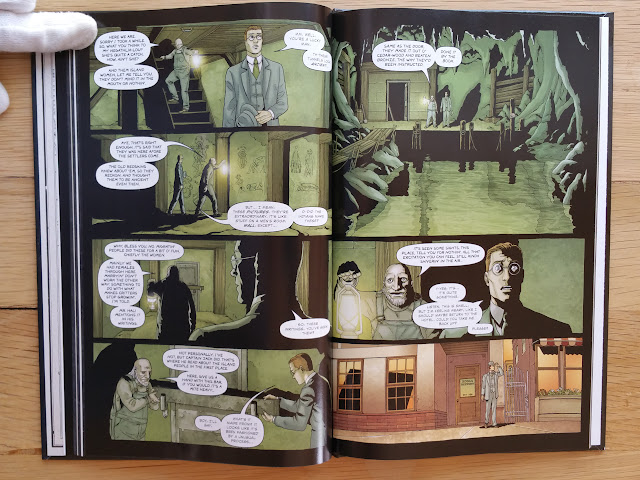 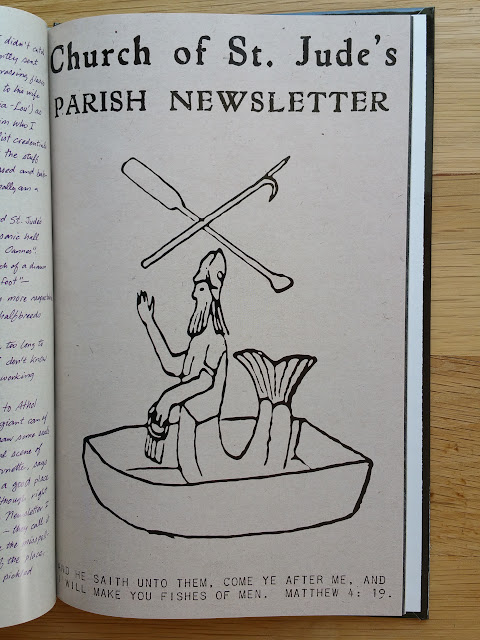 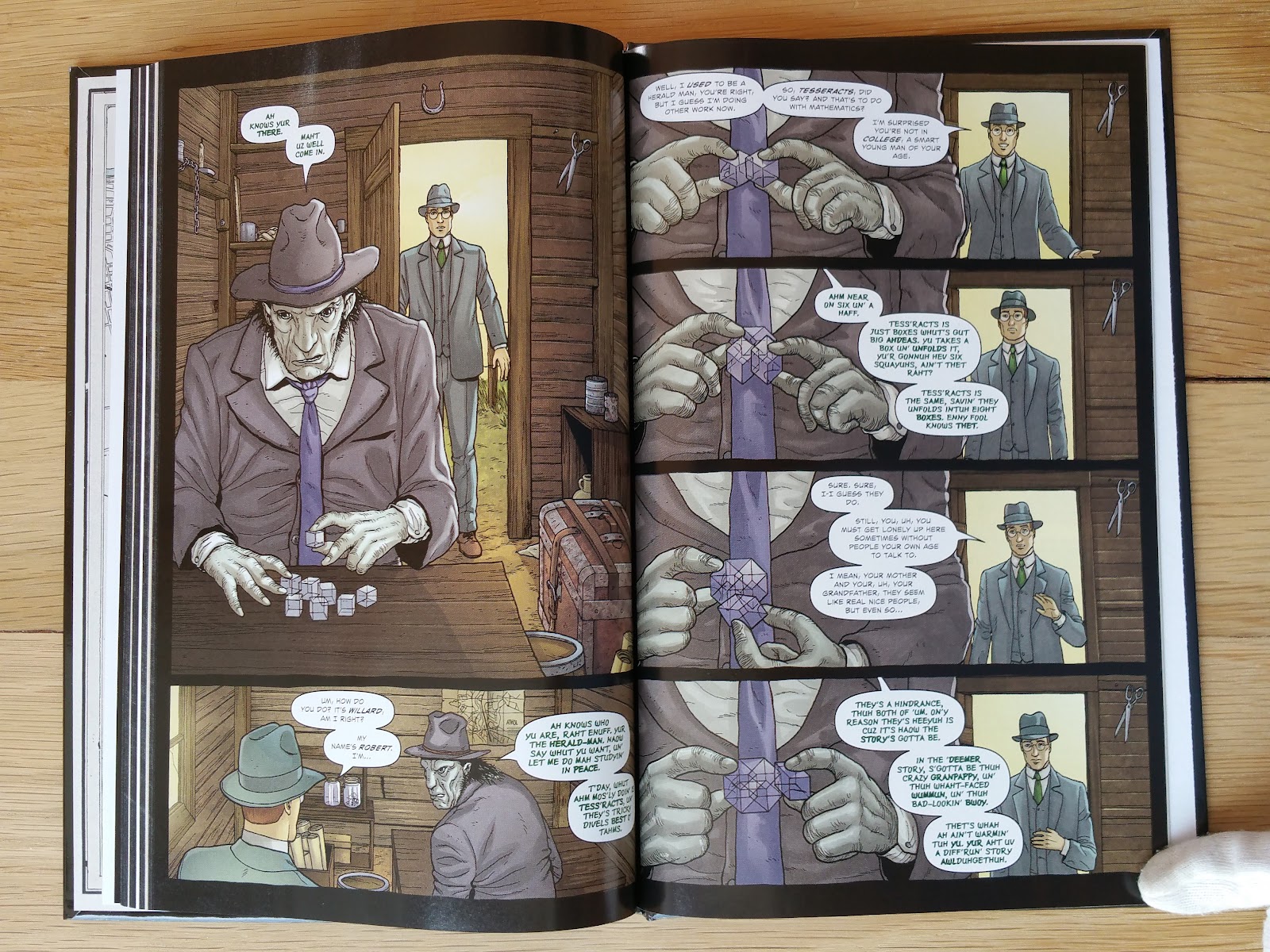 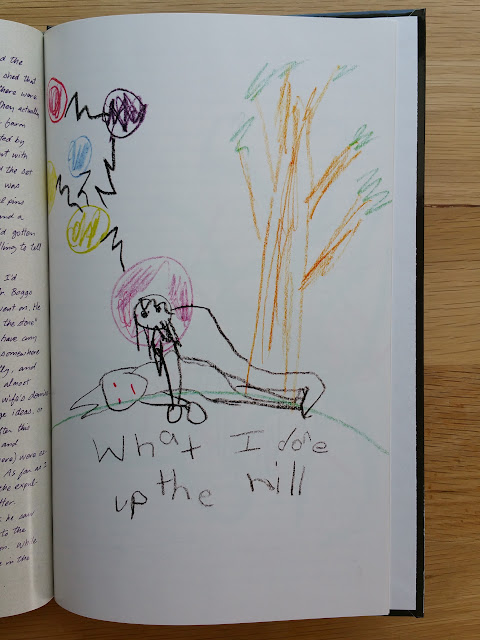 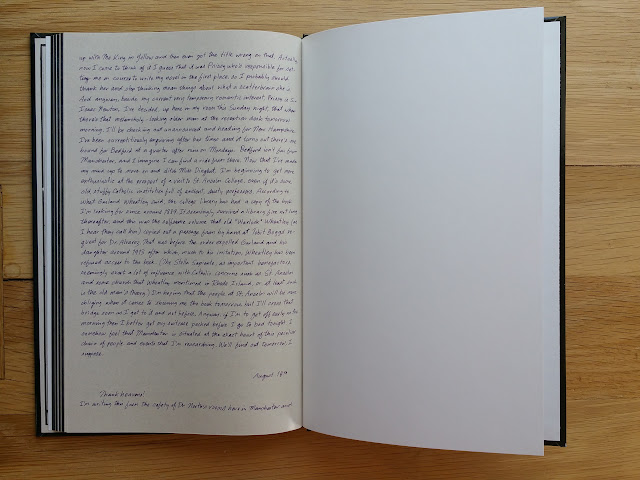 There were many variant covers produced with the monthly comics, here they are for completion purpose (although I am not sure I am exhaustive here):


Notice that a limited run of 100 copies of Providence #1 CGC Signature was proposed as a reward during the Cinema Purgatorio campaign.

I cannot finish this article without citing this indispensable annotations site dedicated to Alan Moore HPL's related works, Facts In The Case of Alan Moore's Providence. Go check it, you will not be disappointed!